Skynation is a Vancouver based digitally creative brand intersecting technology, entertainment, and design. CXXLAID is Skynation’s latest project. It is a hip-hop showcase that puts a spotlight on “Vancouver’s underground hip-hop scene.” CXXLAID is in its first season and about to do their third show this Saturday at the Rickshaw Theatre. The headliner is Quentin Miller, supposed ghost writer of Drake, and Skynation will be producing his first music video.

Grounders sat down with the Kayode Fatoba and Victor Tochon, respectively Skynation’s co-founder and VP of Sound, to find out more about their project CXXLAID.

Tell me about Skynation? How is it related to CXXLAID?

Kayode: I’m the co-founder of Skynation the other is Jerry Agudogo. He’s really the inspiration behind Skynation. He wanted to be a programmer and a lot of people were coming to him to hack into and jailbreak their Iphone 3. I told him he could make money off it and we should start a business. Then we came across the South African government who paid a lot of money for their government website. We decided to service individuals and Skynation started as a web development company to create affordable solutions for the African design community.

I love event planning and I see it as my mission to bring people together. So I said “dude we can bring technology and events together.” I’ll handle the design side and expose people to Skynation and you can handle the tech. We realized we were doing a lot for the event from ads to music for the ads and sourcing artists. We pivoted so much that we became a company that creates solutions intersecting technology and entertainment and design – like TED. We have a ton of creatives and projects in the pipeline. Our company has started to grow into this complex thing and we became responsible for a lot of projects. We produced SFU’s fashion show, African Business Forum at UBC, we pioneered the African Descent Festival and we have produced a couple of applications ourselves. CXXLAID is this concept that we are producing as our own project.

Victor what do you do for Skynation?

Victor: I am the Vice-President of Sound in production services. I manage artists and take care of music production. I produce anything to do with sound like music videos and events. In terms of CXXLAID I am managing relationships with all the artists performing. We have Quentin Miller coming and I am going to be managing him and the crew. We will be doing a couple of videos here in Vancouver. 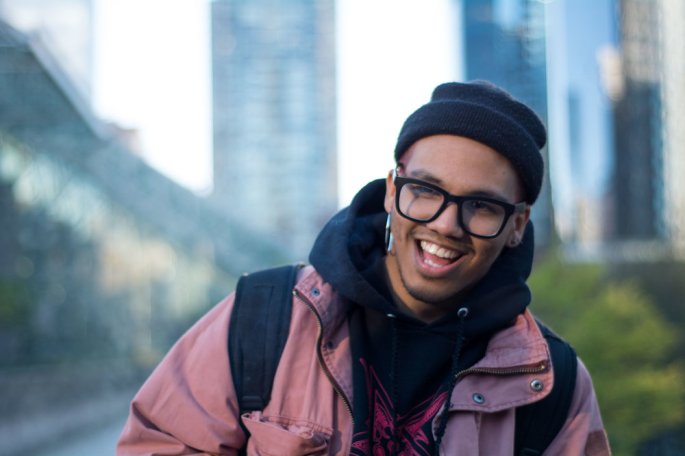 Do you hava timeline for those?

We can’t say more on that, there is a lot in the pipeline.

How do you balance CXXLAID being “underground Vancouver” while bringing artists from other places?

Kayode: Quentin Miller is relatively underground in that if we didn’t bring him out nobody would. The headliner from show two was from SFU and the artist we brought from Toronto for show two was not the headliner. Where else do you have that?

Vancouver is difficult because there aren’t many new places to perform. Are you going to try and change that?

Victor: Vancouver is different because it has a really strong folk scene. Which isn’t a bad thing we just have to compete with their infrastructure, also EDM. We need to find ways to highlight the underground hiphop scene in Vancouver.

Kayode: Historically it’s going to be written that CXXLAID started in Fortune Sound Club. Part of what we are doing is not trying to limit the showcase to that specific spot. If I’m trying to see an EDM show I can go to Caprice or Venue there are so many options. We want to build our brand then move around. But it depends on what we are trying to present. Hiphop is not just rap we are just using that to commercialize CXXLAID. Hiphop is more than that it’s music, fashion, dance, djs, graffiti, and more. We have live painting at all our shows and a dance battle in show two to show that we are not limiting ourselves.

Where do you want CXXLAID to be in a year?

Kayode: We have  three year plan.

Should I jump to the end of the three years?

Kayode: Haha nah I can’t say but we have a lot of plans. We are in a lot of talks with management and a lot of growth is being associated with our platform. After the third show we are going to have a merch section where you can buy posters of the artists and whatnot. Those proceeds will go straight to the artist. We are also developing partnerships with radio stations. Because it’s hard for them to curate music to a genre they don’t listen to.

So are you becoming a brand development agency + platform?

Kayode: Yeah because we are cross marketing all the artists for this huge stage where they are getting a quality production. We are trying to get partnerships with different blogs and magazines that would be able to have that exposure too. There are a lot of community stakeholders who want to purchase from our platform because we are curating locally but have an international feel that helps them step their game up.

What do you get out of that? How does Skynation benefit?

Kayode: Revenue from tickets. Our shows are not free and we pay all of our artists and production crew. With sponsors we also reinvest back into the platform and keep going.

Victor: Do you ever make yourself some Kool-aid? You know where on the blender it says one cup of water and the Kool-aid pack tells you to put in two spoons of sugars but you do three because you do what you want? I be jamming all night on that sugar high. Kool-aid is a culture thing.

Kayode: Adding to that. There is not a lot of black people in Vancouver

Victor: I was trying to hit that

I have no idea how that was going to happen but you did not.

Kayode: Vancouver is one of those cities which has practiced gentrification so well it is so normalized. Ecological gentrification is something that a lot of people speak about. But, rarely do they speak about the appropriation of culture from gentrification. Basically, the aspect of commercializing a culture is something that for me can be seen growing up with Kool-aid in Toronto. There was this stigma “oh you drink Lool-aid, you drink purple drank, you don’t drink normal juice.” I thought “that shit hurts.” As I grew up I realized that Kool-aid is actually a normal brand.

Victor: I mean every white kid drinks a Capri-Sun why don’t they get shit about it?

Kayode: See what I mean? We thought why don’t we pick something that symbolizes what we are trying to do without us explaining it. So [CXXLAID] captured the culture. What is actually interesting is that it is Canadian culture. As much as Africans listen to hip-hop they don’t drink Kool-aid. Us in Canada we are very diverse so how do you curate for a subculture who lowkey likes Kanye but your mom doesn’t know who he is? That frequency is who we are trying to target with CXXLAID.

So you are trying to target Canadians? Recently OVO, XO, and So-loki are making a name for Canada but people don’t understand that the reason that is possible is because of the Canadian environment.

Kayode: Yeah like Juni Kim is this rapper who is blowing up in Korea but we don’t know about that and he’s Canadian. It’s crazy because the question becomes how can you pick a name that isn’t generic but is encapsulating of individuals who consume what was black culture but has become a sub-culture. Because what is black what is white? We start to talk about colourism. So what I’m more focused on is something that is able to bring everyone together for the love of hiphop without it being trashy.

To avoid it being gentrifying?

Kayode: Exactly, so that is where we are coming from. A lot of artists are really pushing for it and there are return artists.

I know you have only had two shows but is the audience you want coming out?

Victor: That’s a good question. The audience we had come out for the first show has been hitting us up about this show so I would say they are committed. I spend a lot of time meeting the people coming to these shows and a lot of them are artists, photographers, musicians. I tell them to keep coming and sharing so we are hitting the people we want without caring about things like background and ethnicity.

How many shows do you think will happen this season?

Victor: Better to burn out then fade away. Every couple of months we have one so like three shows.

Kayode: Then we will have a wrap-up networking event. All the paintings from the shows and the photos from the shows we will put up on the wall. It might be at SFU Woodworks and it would be a 24hr showcase to see what Season 1 was.

How do people get involved?

Artists are hitting us up on Facebook. We are in the process of making a website which would have an application process. Right now our goal is to build concept pieces with potential partners.

Do you have anything you want to say?

Victor: Not really – you guys are waiting for me to say something – I got a business degree. I’ll start my album off like that.

What is your name going to be?

Victor: I’ll probably go with Foreign Sun but he doesn’t like that much. He like’s Fear of God more. I don’t think I’m into it anymore because I’m not as hard anymore.

Your turn, Kayode, what’s your name?

Victor: That’s the dopest thing you can be – you aren’t hiding behind anything.

So why do you have a stage name?

Kayode: I was like that, I went through phases where I was picking artist names. What happened is I tried my first large scale event in Simon Fraser University (SFU) and the headliner was supposed to be K’naan and the project was $70,000 and my team raised $65,000. We were $5000 short. He pulled the plug so I had to go up on the stage and tell everyone. That was SFU’s first event, in 2010, and the articles were all full of who’s fault is it. I fell into depression and I went back home to Toronto. Everyone was stoked and like “you got a $70,000 scholarship and then you raised $65,000!” It was trippy. Back here everybody was saying I failed but at home everyone was excited about it.

Did you try again?

Kayode: I just started working on different events. SFU got talent, fashion week, a number of conferences. I got elected as the first VP of student life. Frosh, week of welcome, and then events in Skynation. Because of that mental need for me to overcome what was a “public failure.” Now I don’t see it as that because it was SFU’s first concert and I created the infrastructure for that on the mountain. I pushed myself to rewrite my name because I was scared that if I give my resume, they pop my name on google, and I won’t have a job. I redefined myself to have a lot more positive and then the community that came around me came around Kayode. So it makes sense to go by name.

We are excited. Hopefully we meet our targets for the next year and Show 3 is just the beginning.